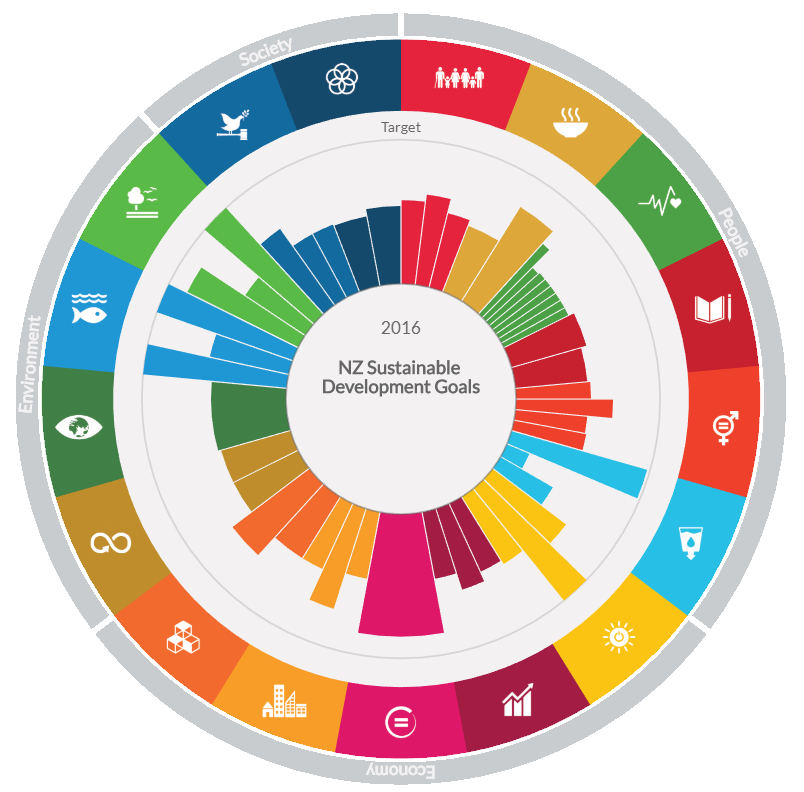 How to Use the Data Tool:

Click on each Sustainable Development Goal to see New Zealand’s progress towards achieving each SDG target.

A short explanation is provided under each target to specify the indicator, where the data is sourced from, and how the target has been set.

Step One: Select a Goal

Use the top bar of the model to select the goal you would like to view data for.

Tab back and forth to view overall goal progress (Goals), or a more segmented version (Indicators) of the goals which reflect specifically relevant data.

Not all SDGs Targets were suitable for this tool, as many are not easily reduced to a numerical indicator or are of greater relevance for developing countries.

Where possible, we have followed the indicators used by the OECD in their 2018 report on measuring the distance to New Zealand’s targets, or other indicators collected by New Zealand public bodies.

To show progress towards achieving each Goal, a target for each indicator was set. Where this target was taken from is specified in the explanation for each target.

In instances where the Aotearoa New Zealand government has set a target for the indicator, progress has been indexed towards this. For example, the government has set a target of 100% renewable energy by 2035. In cases where the SDGs provided a specific numerical target, progress was indexed towards that. For example, UN Target 3.1 stipulates a “one third reduction” in various mortality rates, so a 33% reduction in the mortality rates of various diseases was set, using the 2015 data as a starting point.

Many of the indicators do not have a specified aim set by the government or the wording of the SDGs. In these cases, the target was set as matching the level achieved by the best performing OECD country in 2015. For example, in 2015 France required 20 hours of minimum wage work to escape poverty, the lowest number of hours of any OECD country in that year. Therefore, 20 hours was set as the aim for New Zealand by 2030.

Progress towards achievement of a target is indexed to show a comparable measure of change across all indicators. For every indexed graph, an upward trend shows progress towards that target, while a downwards trend shows us moving further away from the target.  Each indicator has been indexed so that the value for 2015 (the year the SDGs were adopted) equals 50. Achievement of the target is set at 100. So, a score of 75 would mean that New Zealand is halfway toward achieving that target. A score below 50 means that we have moved further away from the target since 2015.

Go To Visualisation
Scroll to top